The first time I had A1 sauce was at a tiny Glendale, California diner tucked into a strip mall: Toasted Bun, like a typical Anytown, USA restaurant, had dusty mini blinds, formica laminate tabletops, tan vinyl booths, a waist-high counter, and sassy waitresses. My father, a Korean-born, Brazilian-raised former coffee farmer who became a mortgage banking executive, loved eating American breakfast there every week before taking me to Little League games. Ham and eggs were his go-to, but steak and eggs was the occasional treat, and an opportunity to create his favorite flavor combination: meat with A1. I always copied what my dad ordered, so I did the same with my steak and eggs, dipping a bite of half-inch griddled steak into the dark elixir.

There’s something about the way A1 sauce spreads when you pour it into the corner of an elliptical plate, the viscous brown liquid permeating the corners of a medium-well steak, seeping into runny sunny side up eggs, and soaking into the crispy fringes of hash browns. Its flavor, ineffable but always memorable, is like raisins mashed into an old orange and then plunged into the dregs of a long-neglected beef stock with dribbles of expired tomato paste. It makes everything taste so good that it tastes overwhelming, and therefore kind of bad, like an ’80s power ballad or ’90s action flick that works because of some combination of nostalgia and bewilderment from how inexplicably over-the-top it is. 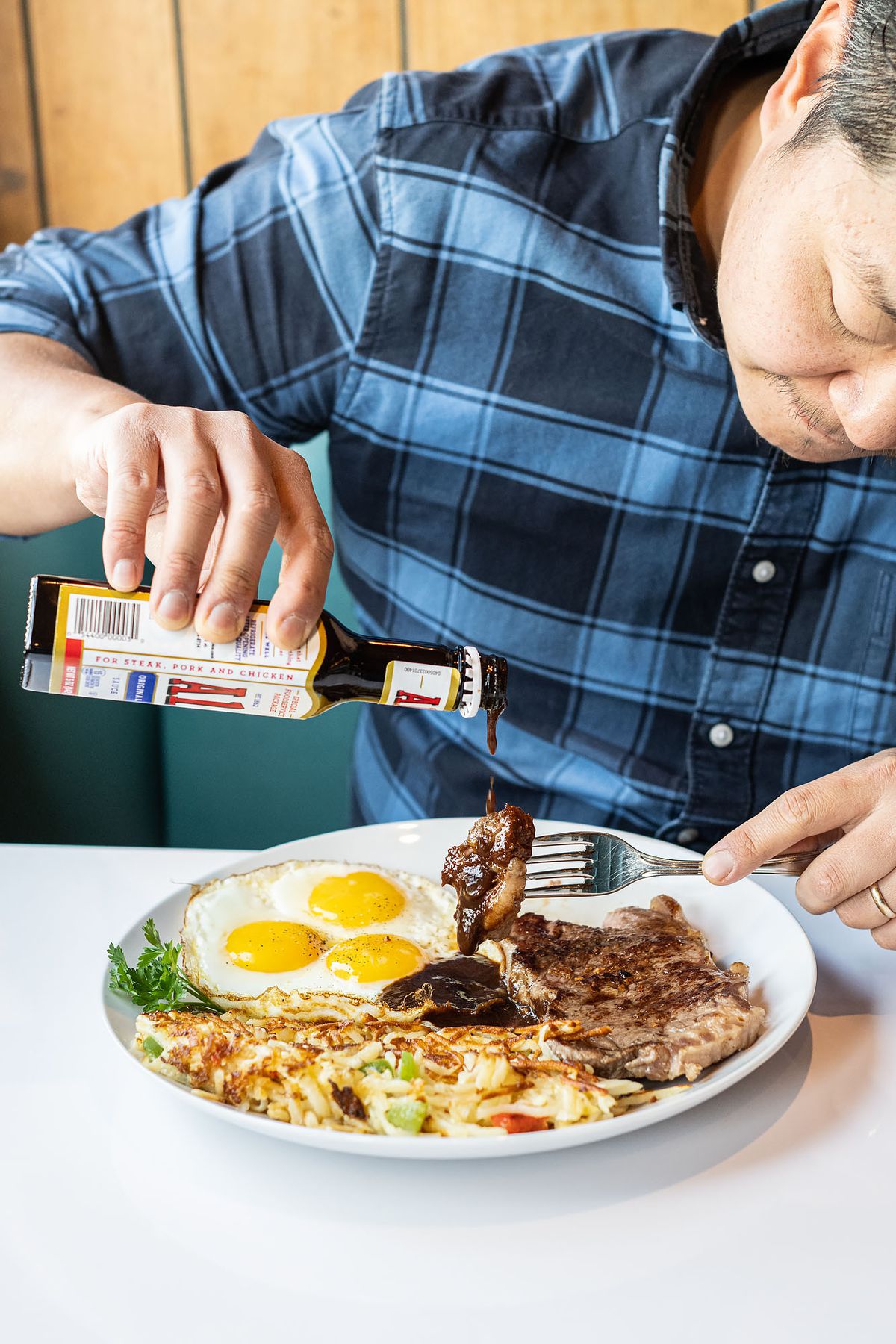 And yet, true gourmands frown upon A1, relegating it to the table ends of myriad diners as a masking agent for steaks of questionable provenance. Originally conceived by one of King George IV’s cooks in 1824, A1 lives in the strata of flavorings called brown sauces, influenced by chutneys in India and co-opted by the British as something to cover the flavor of old fowl and meat. Until the ’60s, A1 was marketed as steak sauce — until the brand realized that would limit its potential, at which point it was declared good “on everything,” like chicken, pork, seafood, and even vegetables. This might explain why serious cooks and food people see A1 as a marker for low-brow eating, despite being a genuinely tasty ingredient. And in a way, in this era of “know your butcher” and eating local, A1 has lost the plot. Most grocery store or restaurant steak is pretty good now, and the people serving prime-grade, dry-aged stuff at fancy steakhouses would gasp if you asked for a bottle of it.

But, like all things, the right time and place can give something purpose again. There’s no shame in searing up last night’s fancy steak leftovers with some eggs or toast, and slathering them with A1 for a quick breakfast. On a recent camping trip, a few friends and I grilled some grocery store T-bone steaks over wood, the fire as the main source of light, with A1 as the only seasoning beyond salt and pepper.