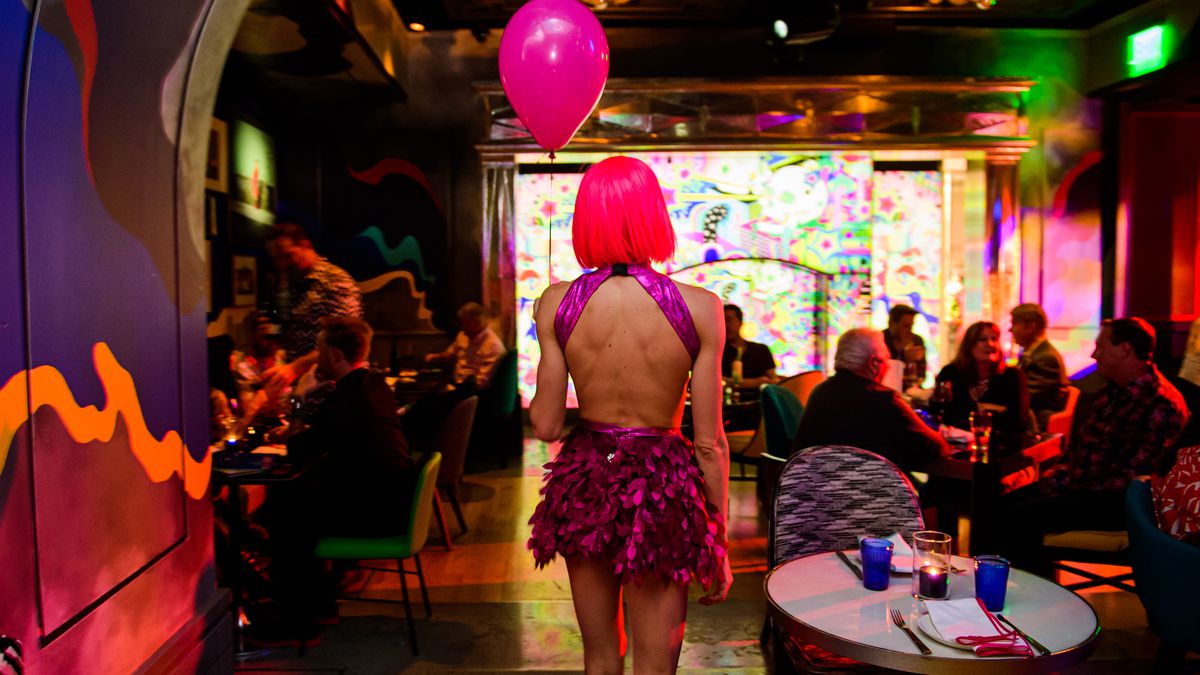 The events of a recent meal at Spiegelworld’s hot new restaurant, Superfrico, included but were not limited to: a man in cut-off denim shorts playing the saxophone to Beyonce’s “Love on Top” while standing on a table; a ballerina pirouetting en pointe through the dining room as she munched from a bag of Lay’s; and a contortionist quietly twisting herself into a human pretzel while a nearby diner pulled slices from a wood-fired pizza, seeming not to notice.

Before dining at Superfrico and witnessing the show firsthand, it’s easy to be skeptical. The acts have been documented across social media platforms, and on-screen they read as ridiculous — possibly annoying. But the in-person experience feels surprisingly nuanced. The acts are precisely, even deliberately, timed and mostly unintrusive. They seem to rise and fall with the energy of the dining room, never demanding energy from unwilling guests or intruding if they aren’t welcome. Much like the best restaurant service professionals, the entertainers seem to appear just as diners look for them, and know when to disappear into the dining room’s glowing background. 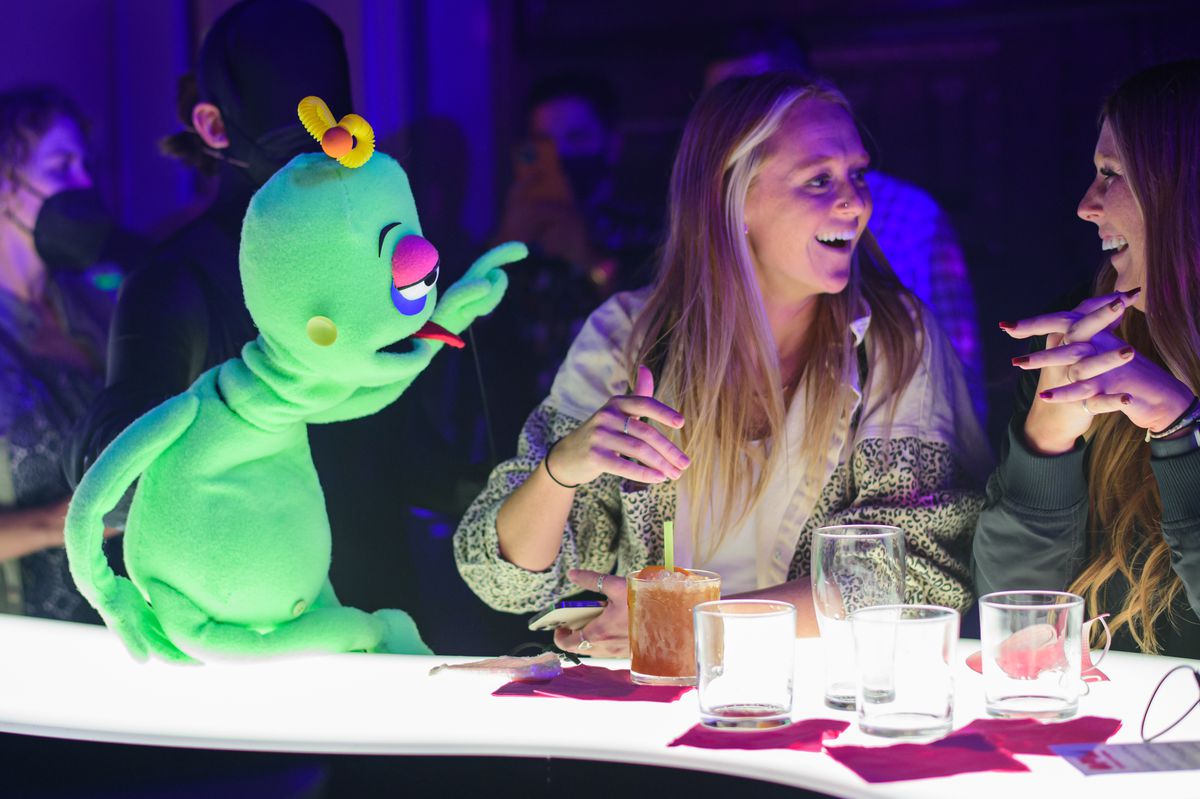 These acts are called Superfeats and are part of Opium, a show next door put on by Spiegelworld, the theater company known for immersive shows like Absinthe and Atomic Saloon. They were designed, for the most part, under the direction of Shannan Calcutt, an actor, comic act director, clown, and acting coach whose experiences include working as a lead clown in Cirque Du Soleil’s Zumanity for more than 15 years.

Calcutt says that when she was approached about working on the project, the concept was pretty amorphous. To build the experience, which had been broadly defined to her as an “interactive experience that connected Opium and the restaurant, but definitely wasn’t dinner theater” Calcutt and about a dozen cast members from Opium hid out for two weeks in the summer of 2021 in a house they lovingly referred to as the clown house.

“People would just go into different rooms, and then we would have a show-and-tell where people would present things,” Calcutt remembers. “These artists hadn’t been in front of an audience in a long time, and there was a great vulnerability in pitching an idea, so there was this strong sense of community and coming together as we worked out what this was really going to look like.” 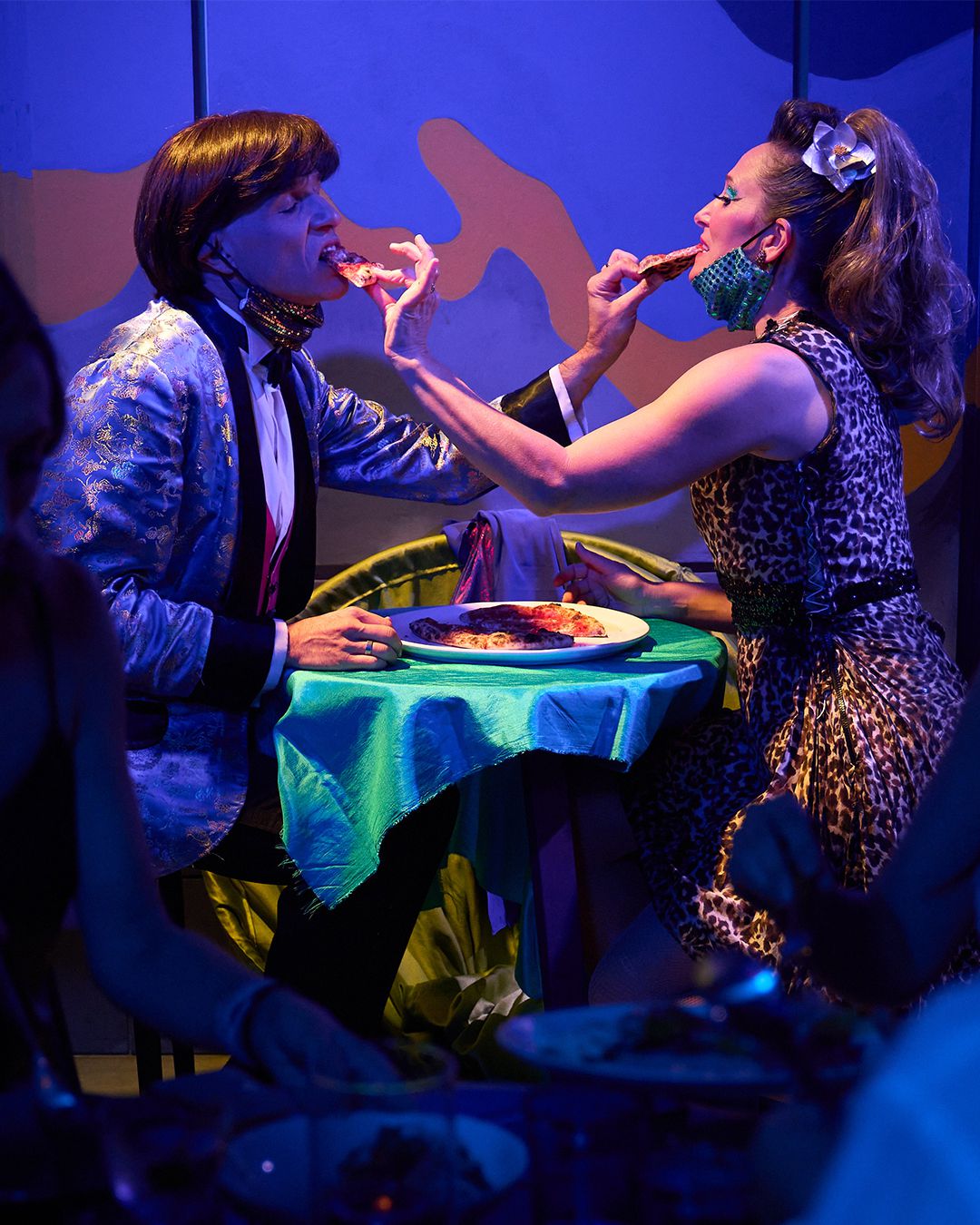 Another performance in the dining room at Superfrico Spiegelworld

By the time they got into the restaurant, before it opened, the cast had more than 60 ideas for Superfeats, Calcutt estimates. When they began rehearsing inside the space, around 30 percent were immediately dropped for logistical reasons — everything had to be able to happen during a busy restaurant service while a live show happened next door.