On February 3, 2008, San Francisco Chronicle writer Wyatt Buchanan reflected on the life of Gustavo “Gus” Arriola, creator of the comic strip Gordo. Buchanan quoted Arriola’s 1989 words: “my main goal [in the strip] was to maintain a positive awareness of Mexico through all the years, every day, without being political. When I started [the strip, in 1941], words like ‘burrito’ were unknown in the United States.” Arriola thought of his strip as an “accidental ambassador” to Mexico.

Gordo, published between 1941 and 1985, was created, drawn, and written by Arriola; it was distributed by the United Feature Syndicate. The comic strip’s story followed the life of fictional Mexican bean farmer Perfecto Salazar “Gordo” Lopez, who lost the lease on his land and made a living traveling around Mexico as a tour guide. Arriola used Gordo and the tour-guiding theme as a method to introduce Mexico and its people to a wider audience: households in the United States. 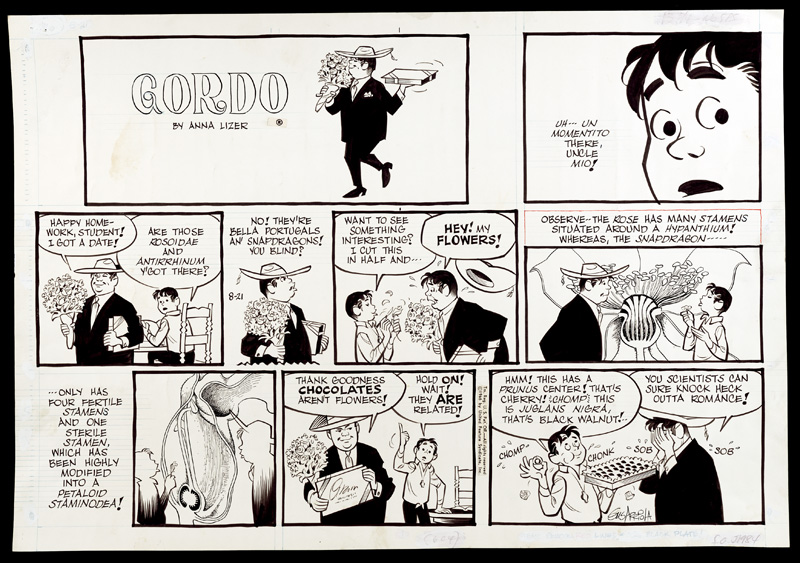 “Gordo,” August 21, 1966. This pen-and-ink drawing shows Gordo’s nephew, Pepito, pulling apart and eating the gifts Gordo is bringing his date. Pepito is fascinated by the scientific components of the flowers and fruit contained in the chocolates. Nuanced messages in the strip point to human traits and cross-cultural similarities such as scientific curiosity, interest in the environment, and young behavior, such as a disregard for accepted etiquette. Pepito was modeled after Arriola’s son, Carlin. (The listed author Anna Lizer—analyzer—was a pun pseudonym for Arriola.) Comic strip art was regularly prepared as “camera-ready,” meaning that the works were prepared and readied by the artist to be photographed for their transfer to a printing plate for printing. (GA.22445)

Gus Arriola’s father was born on a hacienda in Sonora, Mexico. He immigrated with his family to Arizona before Gus was born, then moved to Los Angeles when Gus was eight. Gus credited newspaper comics with helping him learn English while living with his Spanish-speaking family.

After receiving art training in high school, Arriola took Los Angeles animation jobs during the Great Depression at the Mintz Studio, where he worked on Krazy Kat, and later Tom and Jerry, at Metro-Goldwyn-Mayer. In an interview with author John Province in 1998, Arriola said he remembered being fascinated by the Sunday color comics, the great art and storytelling cliffhangers of the time.

While working for MGM, Arriola began producing his own strip, which echoed events from his life. He left MGM to work on his creation full time. Gordo, the continuous-story newspaper comic strip, was first published in 1941, when Arriola was only about 24. To make his subject palatable and humorous to American audiences, Arriola initially relied heavily on demeaning stereotypes about Mexicans in the strip. Later, however, he reexamined the title character and through Gordo and his colleagues endeavored to promote a more positive understanding of Mexican culture and history.