If you’ve listened to “Sweetest Pie,” Megan Thee Stallion’s newest single with Dua Lipa, then you know what the Houston hottie is rapping about has absolutely nothing to do with baked goods. But in a new collaboration, the Grammy Award-winning singer is playing off her music hit with a new pie creation.

The founder of “Hot Girl Summer” has collaborated with online food marketplace Goldbelly to create “Megan’s H-Town Hottie Pie,” a gooey, sweet, salty Texas twist on the pecan pie that is loaded with coconut, pecans, and butterscotch chips with a dusting of gold. Coming in a custom box with Megan’s face on it, the 10-inch pie feeds eight people and is available for purchase on Goldbelly website for a whopping $59, plus shipping. 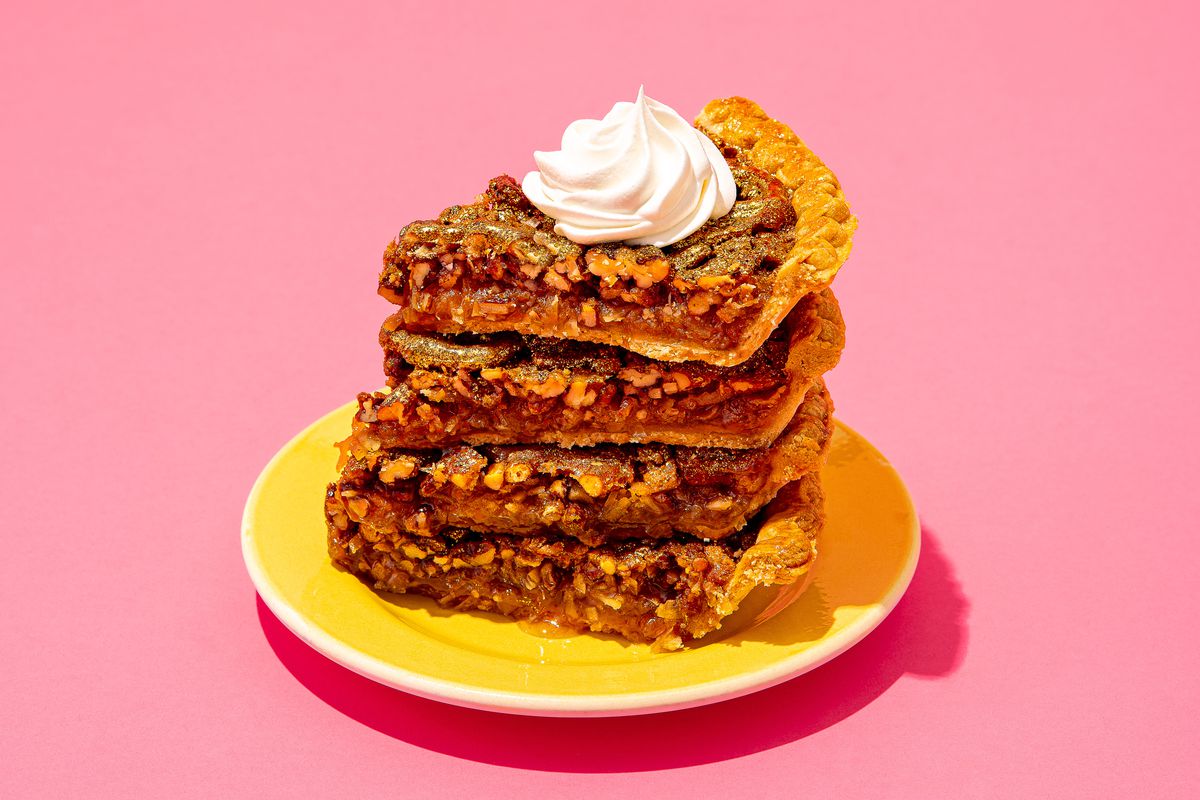 Megan thee Stallion’s “H-Town Hottie Pie” is a gooey, sweet, salty Texas twist on the pecan pie that is loaded with coconut, pecans, and butterscotch chips with a dusting of edible gold. Goldbelly

This isn’t Megan’s first foray into the food industry. Last year, the “Big Ol’ Freak” artist collaborated with fried chicken fast-food chain Popeyes to debut her “Hottie Sauce” — a bright orange sweet and spicy sauce made with honey, apple cider vinegar, and Aleppo peppers. Pie, however, is exciting new territory for Megan, who has largely tried pecan, sweet potato, and apple pies, the rapper said in a promotional video with Goldbelly TV.

Luckily, her new job as “Queen of Pies” has required her to taste-test. In the video, Megan tries out a lineup of different pastry dishes sold on Goldbelly’s platform, including a pecan pie that results in a debate about the proper way to see pecan (“pee-CAN” or “puh-CON”?), an intimidating chocolate-mint grasshopper pie, a chocolate French fry pie made with a French fry crust, a peach pie reminiscent of cheesecake, and a “sweet potato thang” pie that was so good it made Megan say “bitch.”

“Sweet potato pie is just very nostalgic. I feel like it is the pie of choice at the cookout, the family reunion,” Megan said.

Here are Megan’s hot takes on the Texas pies featured:

Unsure of the ingredients, Megan was a little skeptical of the appearance of Royers Pies’ Texas Trash pie. But the combination of coconut, chocolate chips, graham crackers, pretzels and caramel eventually won her over, with the hip hop artist noting that all the ingredients were having a “Body” party in her mouth. The “White Trash Texas” pie, the same ingredients but with white chocolate chips, made Megan break out into a dance.

Their pies are available to order on Royers’ website and on Goldbelly.

Based off the appearance, Megan was a bit intimidated by this deep-dish apple pie. But as soon as she took a bite,