It’s probably not a good sign for the well-being of American entertainment that the only directors with both the skill and industry latitude to make true-blue Hollywood cinema at the studio level seem to be the guys who lived through its final gasp. Circa-‘70s breakouts Martin Scorsese, Ridley Scott, and Steven Spielberg are the last dinosaurs standing, obsolete not in their old-white-man-ness but rather in their ability to appropriate gobs of corporate money to realize idiosyncratic visions on their own creative terms. (Quentin Tarantino pretty much has this standing, he just usually uses it to make somewhat smaller and nastier movies. Damien Chazelle seems to be getting there.) Soon, their careers will end and their Jurassic era will end with them, even as Jurassic Parks are cranked out in perpetuity.

Watching Spielberg’s all-the-trimmings rework of West Side Story, a viewer may be stricken by the sad novelty of its rigorous showbiz dazzle, an extreme rarity in the year 2022 as well as the edited-to-smithereens musical genre. In its bigness, its brilliance, its classicism, and its sheer technical bravado, the film proves that the system can still work — that if the moneymen give geniuses a budget and the space to do things their way, something great will come of it. Produced in the twilight of a studio that’s now been effectively gutted by its new Disney overlords, left to languish in theaters and reinforce the executive credo that good things cannot be profitable, it already feels like the last of its kind.

There’s a death knell in the sparse whistles that cue the awe-inspiring prologue, though Spielberg’s nowhere near egotistical enough to make it about his own waning reign and screenwriter Tony Kushner has weightier topics on his mind. The camera first drifts up past a sign announcing that what was once San Juan Hill has been designated for “slum clearance” to make room for the Upper West Side’s gleaming, modernist Lincoln Center. In an elaborate yet un-ostentatious shot (achieved through a telescopic crane’s handoff to a drone that flies back down to a second crane, augmented with CGI for the wrecking balls and other details), we then glide over the ashen rubble of the neighborhood. These piles of wreckage litter the backlot sets like crumbling columns, vestiges of a fallen civilization; my father noted a resemblance to the production design of the post-liquidation Krakow in Schindler’s List. 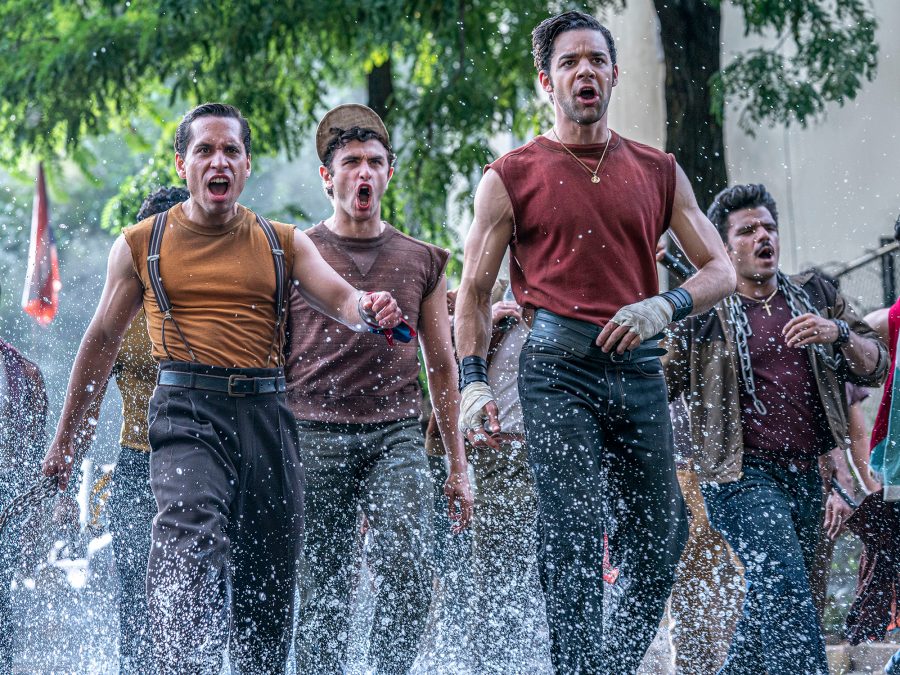 The greaser twunks of the Jets know that they’re losing their foothold in the slice of city they consider their birth right, and they’re not happy about it. As they pirouette through the streets, they re-assert their authority in petty ways, like stealing a Latino shop owner’s sign to uncover that of the Irish bar beneath it, or deep ones, like defacing a Puerto Rican pride mural with paint. Bu crucially, they can only leave their mark on the surface of their territory, the Black pedestrians passing the boys on a crosswalk a hint that they’ve already lost the battle.