Watching an Apichatpong Weerasethakul film will put you in an undeniable, almost unfathomable trance. From his early work in Blissfully Yours right up to his English-language debut Memoria, the Palme d’Or-winning director has never shied away from creating challenging and mysterious pieces of slow cinema that contain unique commentaries on death and reincarnation. Throughout his career, Apichatpong has consistently utilised the rural settings of Thailand – and most recently of Colombia – and the world of sound which inhibits them to convey these intelligent themes and create an intoxicating atmosphere.

The jungles and forests that star in his films are every bit as important as the characters themselves, brought to life in vivid detail through striking sound design. They evoke that incontestable ‘feel’ of an Apichatpong film; the languid, dreamlike atmosphere that will so often leave you lightheaded and transported. The opening of Uncle Boonmee Who Can Recall His Past Lives – a film that explores reincarnation – begins with a water buffalo wandering through a forest, a silhouette with red eyes watching it.

The perplexing nature of this curtain raiser is backed up by the sounds of the forest: the constant, rhythmic buzz of insects, a gentle and barely detectable breeze, the rustling of leaves, and an eerie, near-silent atmosphere. This heavy focus on the aural as a way to set the mood and tone of a film results in a hypnotic and breathtaking introduction. For Apichatpong, this is a stylistic trademark that he returns to time and time again and as such his films have become a fuller sensory experience. 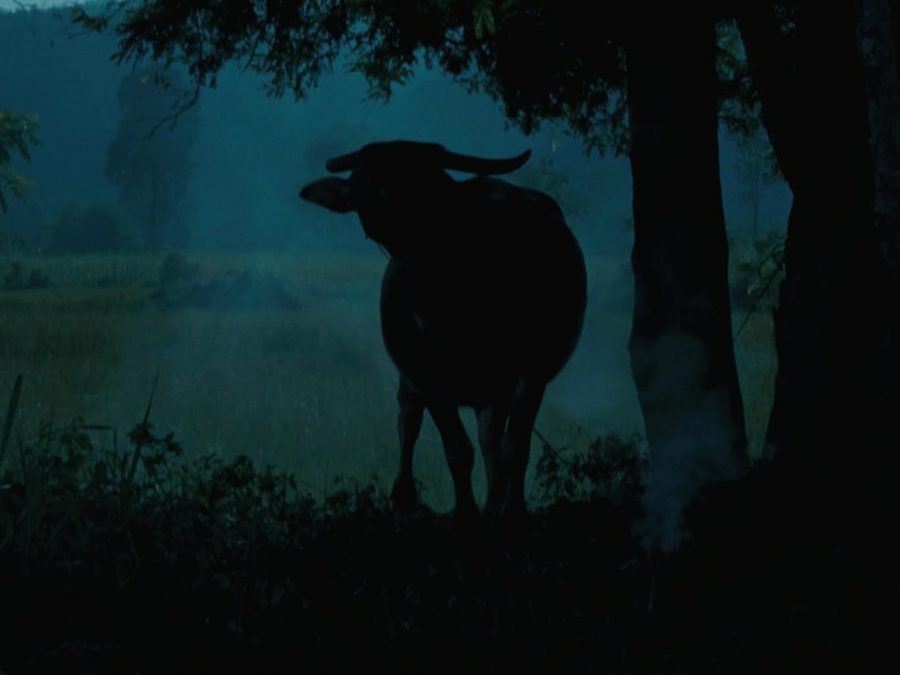 Beyond the sensory experience for audiences, Apichatpong examines these arboreal settings on a more symbolic level, embedding fables and real-world history into these environments. Uncle Boonmee sees Apichatpong deploy stills of soldiers (from an unknown period) on duty in the fields and forests of Thailand, marking out the historical memory of these places; humans might move on, but the earth remembers. It is these themes of environmental memory, karma and reincarnation that are so important to Uncle Boonmee, and which could not be achieved in such a frank and memorable way without Apichatpong’s masterful utilisation of the rural.

Uncle Boonmee also has a short interlude to the main narrative, telling the story of a princess making love to a catfish in a magical waterfall setting. Lit by moonlight, the rural surroundings imbue the sequence with an enchanting feel. Dialogue is used sparingly, with the sounds of the forest giving way to the gentle running of the water, as the fantastical imagination of the fable comes to life. These stories, real or otherwise, are part of the very fabric of nature.

Perhaps out of all of Apichatpong’s meditations on nature preserved on film, a reverence for its vastness feels most resonant. The second part of his 2004 triumph, Tropical Malady, is a jaw-dropping sequence about a soldier lost in the jungle, sent alone to kill the spirit of a tiger shaman,