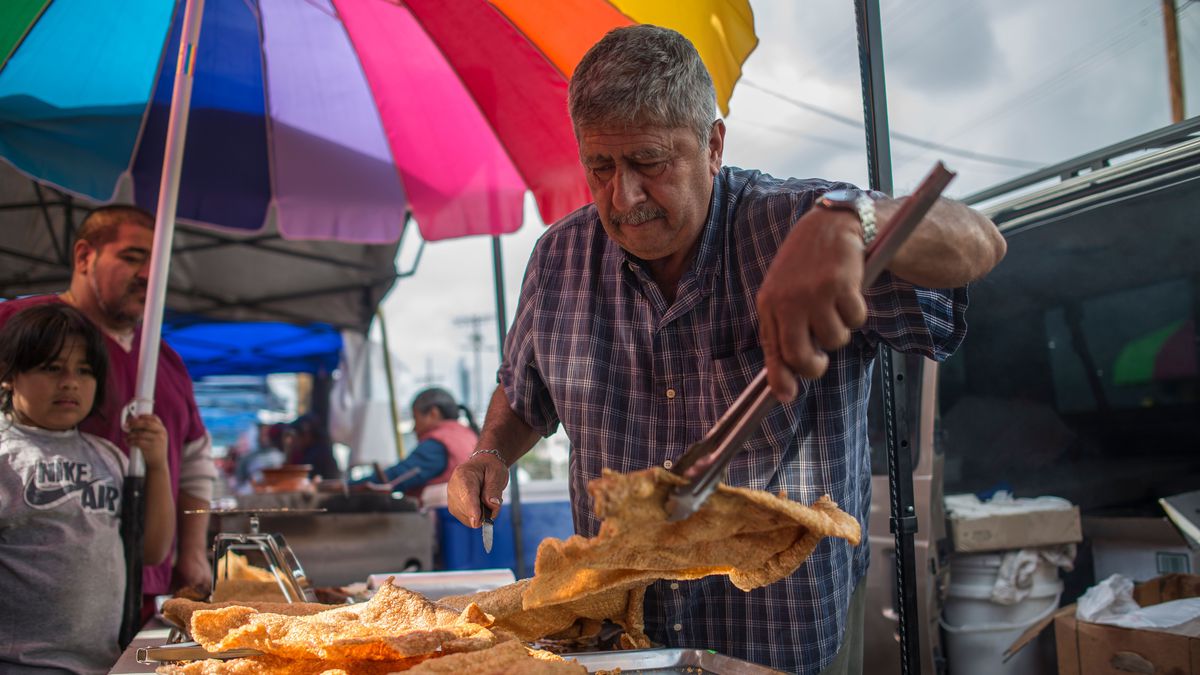 Street vending is technically legal in Los Angeles, but vendors say landing a permit is often out of reach

Outside the Big Saver Foods market in the small Los Angeles neighborhood of El Sereno, a cluster of sidewalk vendors wait in the parking lot for hungry customers to finish their shopping and stop by for a pupusa or an agua fresca. Follow the tantalizing scent of smoke and grilled chicken that wafts through the air, and you’ll arrive at Pollos Asado El Jaimito, where vendor Jaimie Trujillo is cooking up whole, spatchcocked birds on his outdoor grill.

Trujillo has been making his living as a street vendor in L.A. for three years, but he has only been setting up at this spot for a couple of months. At his previous location, local authorities sometimes cracked down on him for operating without a vending permit. Once, he even had to run and hide from them, lugging his entire grill full of chickens with him on foot so it wouldn’t be confiscated.

Still, Trujillo hasn’t tried to get a permit, because of the warnings he’s heard from other vendors. “They say it’s very difficult, because you need permission, kitchen licenses, and all these permits,” he says in Spanish.

Trujillo’s situation isn’t an uncommon one for street vendors in L.A., where the practice of selling food outdoors has been strictly regulated since tamaleros from Mexico and Chinese immigrants operating pushcarts became commonplace in the city around the turn of the 20th century.

Even though vending was technically legalized in California in 2018, state public health laws still make it almost impossible for most local vendors to get the permits they need to sell food in the formal economy, requiring extensive (and expensive) cart setups and prohibiting tasks like reheating food or cutting fruit.

Now, some advocates and politicians are pushing to overhaul the state’s outdated food code as part of a long-standing struggle to protect vendors from harassment, fines, and legal troubles. But others worry the proposed regulations don’t prioritize food safety enough to protect consumers.

It’s a battle that has been playing out for years in the many major U.S. cities where vending is either banned or strictly regulated. After street food carts were legalized in Chicago in 2015, advocates had to fight to lower steep licensing fines, and vendors in the city still aren’t allowed to prepare food on their carts or at home. In New York, vendors are pushing to reform a system where they can pay upwards of $20,000 for one of a limited number of permits on the black market.

In L.A., where carts selling chili-topped fruits, pupusas, and tacos can be found on almost every corner, the vendor-led campaign to legalize street food began when a group of women in Boyle Heights started speaking out against vendor harassment in 2008.