In Kat Coiro’s Marry Me, jack-of-all-trades Jennifer Lopez finds herself reprising the role she’s always been strongest in – that of a beautiful celebrity earnestly pulled between looking for love and staging her next big stunt.

Kat Valdez (Jennifer Lopez) is one of the biggest pop stars on the planet, and is all set to marry Bastien (stiltedly played by Colombian pops tar Maluma). The proposal is set to be streamed in front of a worldwide audience of 20 million people, on stage and at the final stop of their tour.

To the outside, their relationship is perfect – as Bastien makes sure to advertise on Instagram – but, in the middle of their show, after Kat performs a gospel-pop number in a Jesus cross leotard surrounded by dancers in Nun PVC bodysuits, Page Six releases footage showing that her betrothed has been having an affair.

Decked out in a Zuhair Murad wedding gown, Kat gets back on stage to a sea of fans with phones at the ready, all awaiting her reaction. Its then that she spots quintessentially Normal Man Charlie Gilbert (Owen Wilson), a maths teacher dragged along to the concert by his friend and colleague Parker (Sarah Silverman), in an effort to make him cooler to his pre-teen daughter Lou (Chloe Coleman).

Kat calls Charlie up on stage to marry her, and Charlie complies, realising she’s having a meltdown and kindly deciding not to make her life any more difficult. And so, now married as complete strangers, the tried and true formula of opposites-attract-just-go-with-it rom-com ensues. 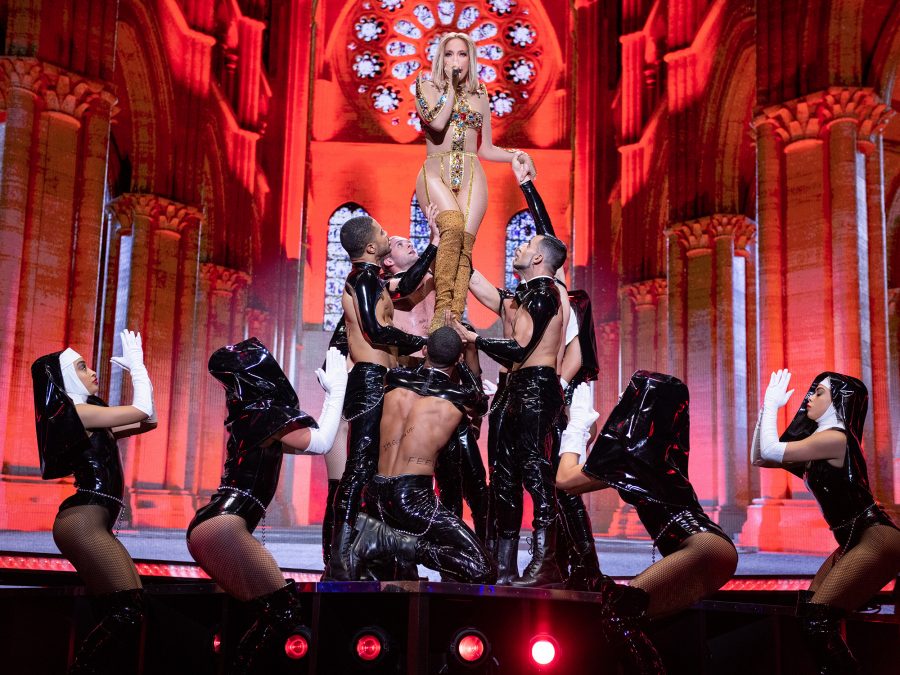 Marry Me is refreshing in its refusal to pretend to be anything other than a fluffy star vehicle, and one that has us remember why we fell over ourselves for Jennifer Lopez and Owen Wilson in the first place. Though their romantic chemistry is unconvincing, they shine in their individual segments, when Kat is being fussed over by her team or onstage and Charlie is walking his constipated bulldog Tank or coaching the “Mathletes”.

When you relax in to the absurd initial premise (based on a graphic novel by the way), the most jarring parts of the film become the excessive spon-con. In a time when the reality of celebrity is so grimly accessible and as utterly un-fabulous as it’s ever been, director Coiro has no choice but to include the endless sponsorships and Instagram posts we’re subjected to outside of the cinema. A generous reading might be that this is some kind of incisive meta commentary, but the film is too sweet for that.

And so Marry Me checks the boxes you’d expect it to when you buy a ticket to see Jennifer Lopez as a romantic lead. It’s nice to see her occasionally speaking Spanish and no longer banking on the racial ambiguity that made her so successful in the early 2000s.