The star of Sundance hit Jockey speaks on the intricacy of working with animals and his love of movie westerns.

Clifton Collins Jr is one of the most well-versed character actors in the business and his latest film, Jockey, is a career-best performance that sees him finally get the credit he’s always deserved. With unflinching dedication and unparalleled commitment, Collins threw himself head-first into this character study of an ageing jockey whose retirement is staved off by the arrival of a racehorse that is a sure bet for victory.

LWLies: You’ve worked with the writers of Jockey previously but the character of Jackson was written specifically for you. What is it like coming aboard a project in this context?

Collins: We had a previous experience on Transpecos, a film that Greg Kwedar directed and Clint Bentley produced, so it was through that collaboration we got to learn about one another. To continue to build upon our process that was already developing a quick shorthand is a dream scenario for an actor. When I got the initial script it was sixty pages but they knew so much about my personal past. [Jockey] is a little piece of all three of us, Greg, Clint and myself.

How did you go about integrating yourself into this live racecourse and getting familiar with the nuances of the extremely competitive horse racing community?

Extreme humility. I wanted to blend in. I didn’t want to be the ‘actor guy.’ That said, I went to great lengths to do things to help people feel comfortable. I’ll do all the groundwork, happily and willingly. I want to know what that work is because you don’t start at the top, you start at the bottom. Also, because we were a skeleton crew it allotted for a great deal of anonymity which is another gift. No one’s singling us out, I had people coming up saying ‘I didn’t see you on the form, I’m gonna put some money on you.’ They don’t expect to see an actor there and with the size of the crew, it probably looked like a documentary crew. It made it easier to acclimate, to delve into that world and soak up as much as you can.

It was very difficult to leave them. I still speak to some of the jockeys today but I miss it. The people and the jockeys have so much heart. There’s something very attractive about being with people that are so humble and resilient and willing to risk everything for that one winning moment.

It’s such a dangerous sport, a completely different physicality with handling horses and sitting in the saddle compared to horse riding.

You’re right. You’re sitting in the saddle up to the gate then you’re up and pretty much on your feet in the stirrups whereas on Westworld you’re seated in comfortable saddles. The saddles on quarter horses are like little g-strings with a bit of foam in them. 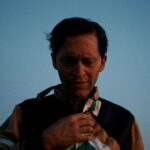 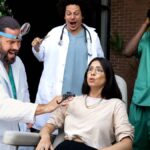