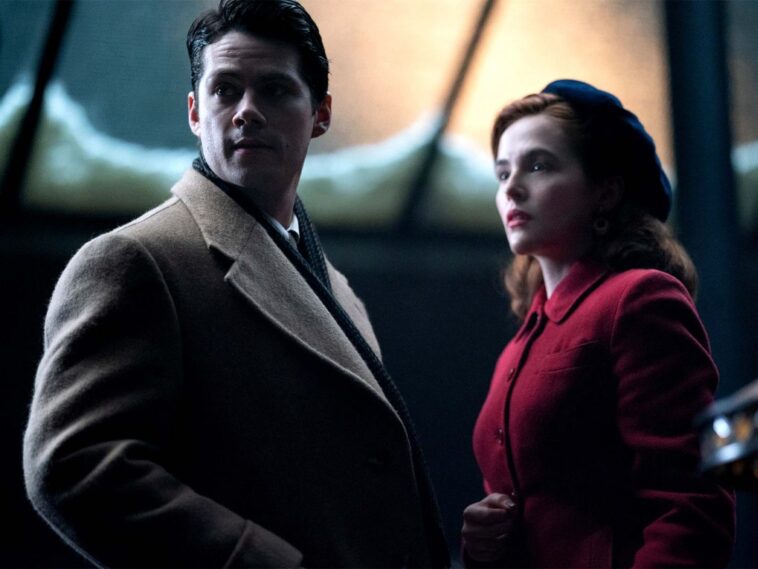 Screenwriter Graham Moore turns his hand to directing with a sartorial spy thriller.

Given its sartorially suggestive title, it’s apt that The Outfit is an elegant and stylish thriller. It’s useful for debut feature director Graham Moore that an outfit is also a euphemism for organised crime organisations, especially when his protagonist tailor – or “cutter” as he calls himself, becomes entangled with one.

It’s December 1956 in snowy Chicago where ageing ex-pat Londoner Leonard (Mark Rylance) diligently goes about his trade measuring, shaping and cutting fabric. A balanced, amiable fellow, Leonard is unhurried but precise. He speaks slowly with the care and cleverness he applies to his tailoring, a master of his art trained in the Row (Savile, of course). A man so respected that even when he admonishes his friendly receptionist Mabel (Zoey Deutch) for her ability to fold pocket squares to his exacting standard, it’s dispatched and received with good humour.

In the corner of the back room where Leonard works, well-dressed men call throughout the day to drop envelopes filled with what we imagine to be cash. Two such men are Francis (Johnny Flynn) and Richie (Dylan O’Brien) the latter being the son of local crime boss Roy Boyle (Simon Russell Beale). The pair disparagingly refer to Leonard as “English” as if it were his name rather than his nationality and have such sleazy menace, it’s clear that when we hear them mutter darkly about “the outfit” and a rat in their own mob, danger is imminent.

Leonard is working late when Francis and Richie call round in a sweaty, bloody panic. A gang war with rival crew the La Fontaines has left Richie with a bullet in his side and as they hide out from them and the police, Francis forces Leonard to stitch his wound (using regular thread in the workshop) at gunpoint. They also possess an unlistened-to tape that their rat has evidently sent to the FBI.

As an audience we suspect early on that Leonard knows more than he lets on and when a smattering of twists corkscrew their way into the film, some are less shocking than others. That said, the story, scripted by Moore and co-writer Johnathan McClain, is told briskly and with such economy we don’t mind spotting where certain things are heading. It’s a joy watching Rylance and Flynn in particular as Leonard and Francis try to outfox one another: a gripping battle of measured versus menacing. Deutch also impresses as canny Mabel and Nikki Amuka-Bird (last seen suffering on a beach in M. Night Shyamalan’s Old) turns up late on in a small but vital part too.

Given the paucity of flashbacks and the single, two-room location it’s arguable The Outfit could have been a play instead and one can certainly imagine a tale as compact and tense as this working well on stage. But to quibble one would be as f